San Diego – With the goals of modernizing the Navy’s physical presence in San Diego and improving transit connections to the airport, Mayor Kevin L. Faulconer was joined today by regional planning and transportation agencies as well as the U.S. military to announce Navy Region Southwest and the San Diego Association of Governments have signed an agreement to explore possible options for the redevelopment of Naval Base Point Loma Old Town Complex.

“This is an amazing opportunity to strengthen the Navy’s presence in San Diego, create thousands of jobs and make it easier for people across the region to get to and from the airport,” Mayor Faulconer said. “This agreement is a promising beginning to what could be one of the most transformative projects in our region’s history.”

The Memorandum of Understanding serves as a framework for discussions between the Navy and SANDAG as they work together to evaluate potential options for the iconic naval property. While the agreement does not commit either organization to a course of action, it allows the Navy to better understand SANDAG’s goals and vision, and how they might be incorporated into its own redevelopment efforts. The MOU also requires both organizations to cooperate in preparation of federal, state and local environmental documentation.

“The Navy remains dedicated to creating a more modern, efficient workspace on the OTC property to better meet the mission requirements of Naval Information Warfare Systems Command (NAVWAR) and the other tenants on the property, while working closely with SANDAG and other entities to foster robust community engagement for this project,” said Naval Facilities Engineering Command (NAVFAC) Southwest Commanding Officer Captain Mark Edelson.

Naval Base Point Loma Old Town Complex consists of approximately 70 acres of prime real estate, just off the Interstate 5 freeway and near the airport. Redeveloping the property creates an opportunity for a public-private partnership that could deliver 21st-century facilities for the Navy and could help tackle San Diego’s longstanding transportation challenges.

“This is the beginning of what I expect to be a long partnership with the Navy,” said SANDAG Board Chair and Mayor of Poway Steve Vaus. “The MOU creates the opportunity for SANDAG and the Navy to do something very special in the region, clearing a path for us to work on a major transportation hub and providing a transit link to the airport.”

The most recognizable tenant on the site, NAVWAR, is part of the Navy’s cyber warfare arm. It dates back to World War II and the warehouses were previously used to manufacture aircraft. It currently provides more than 3,500 jobs to San Diego’s cybersecurity industry.

“The military provides more than $26 billion in direct spending in the San Diego region, making a huge impact on our local economy. When you consider the ripple effects from this spending, the military accounts for over $50 billion annually and supports nearly 340,000 jobs,” said San Diego Military Advisory Council Executive Director Mark Balmert. “The redevelopment of the Naval Information Warfare Systems Command headquarters is yet another way our community and our local military are working together to keep San Diego the best military community in the world.” 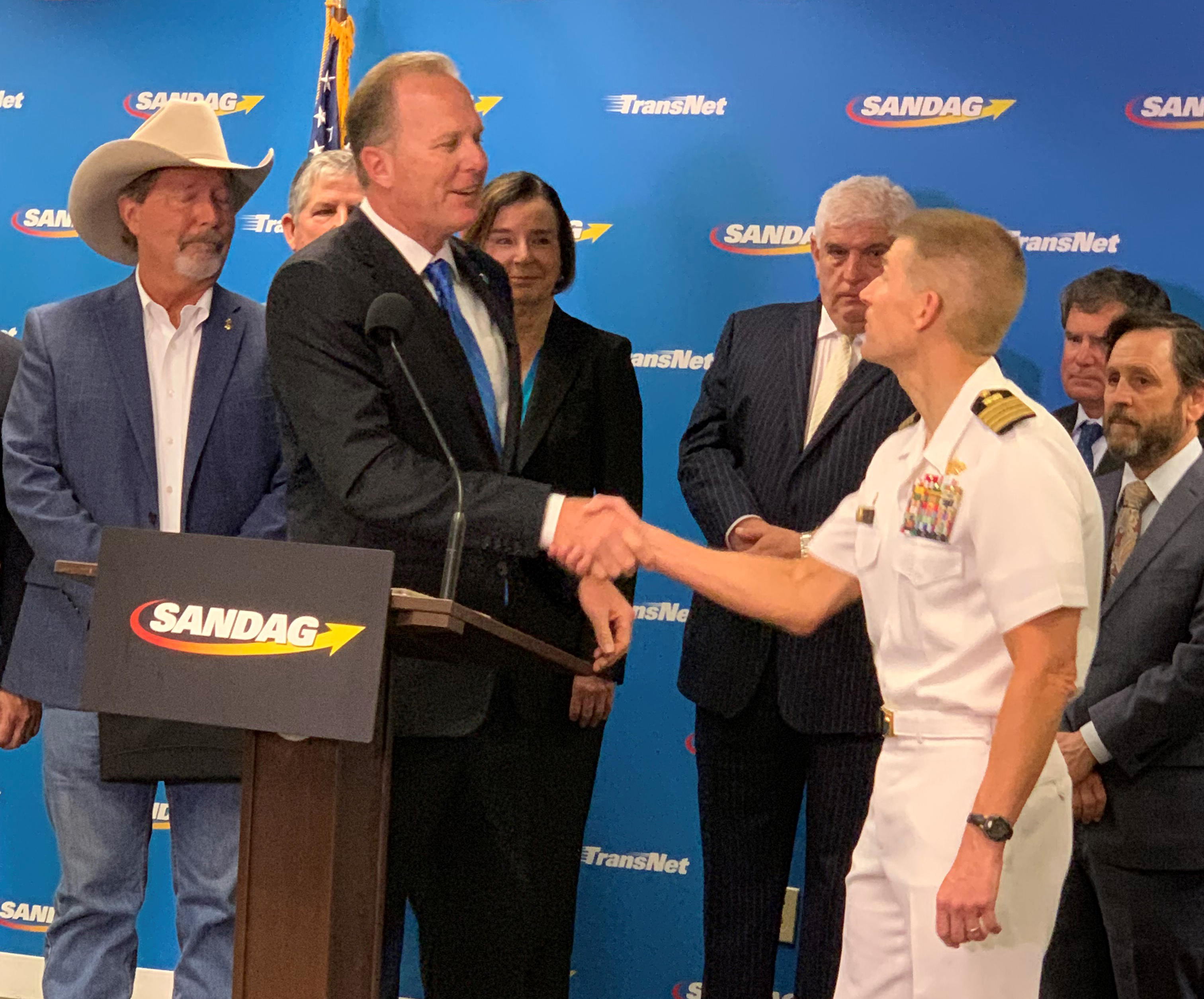